In the age of the internet, most of us have been bred to doubt. Doubt everything. The more you internet, the more you doubt. With my heavy web-use, that makes me a Grade A Professional Doubter. So, when “Marc Summers” replied to a random tweet I posted, of course I thought “ok, whatever, dude.”

Sure, his profile said he was Marc Summers, and his picture was of him as well. But, if I wanted to, I could change mine to say the same.

I had a few other reasons for my doubt:

1. Unverified account. I don’t know how difficult it is to have your account verified by twitter or what the stipulations are, but I believe they try to keep an eye on “celebrity” accounts and validate them. So, an unverified account claiming to be a tv celebrity raises a flag (or pulls one out of a giant nose, as the case may be).

3. Just because you say something on the internet (and especially on twitter) doesn’t mean it’s true. “FREE IPAD3!” “I’m a hot lady just looking for sexy love, no stringz attached, plz subscribe.” “OMG i just found this terrible photo of you, click here to see it http://www.itsavirus.com/stupid&#8221;
No. Stop trying to fool me about everything, internet. I am wary of you already.

4. Most importantly, I couldn’t figure out why Marc Summers would be searching his name on twitter and responding to random strangers. Not that I think he has red carpet events to attend all day and thinks he’s too good for us normal folk, but I somehow have this image that he’s lounging luxuriously next to some gorgeous swimming pool all week. Maybe it’s filled with green slime, maybe it’s not (depending on how intricate my Double Dare-based daydreams happen to be that day).

So, I questioned… and Summers got miffed.

After that, I relented, apologizing for the hassles. Because really, be it Marc Summers, Marc Summers’ PR, or a guy who dresses in a Marc Summers costume and watches VHS tapes of What Would You Do, I just don’t like rubbing people the wrong way for no good reason. So, I apologized to a guy who I was sure at least believed he was Marc Summers.

He had told me to watch him on The Chew. Not subscribing to cable tv, I really have no idea what that show is, except that it was probably a show about food (hey, *I* like food!). Wednesday morning, I got a tweet informing me that Marc Summers actually had been on The Chew. I clicked through to his profile and glanced through his previous tweets. In addition to the pages upon pages responding to strangers and subsequently arguing back that YES, he was actually the real really Marc Summers, there was a photo posted: 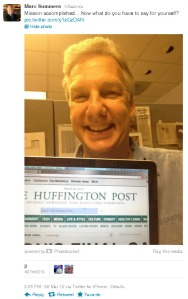 So, sorry again, Marc Summers. I hope you hold no grudges against me, as I would hate for you to throw the game when, inevitably, Double Dare does a revival tour and I am selected as a contestant.

Also, I hate the idea that anybody whose shows I watched countless hours of as a child would have any unhappy feelings towards me. Super. Now all I need is Mark Paul Gosselaar or Bob Saget pissed at me. 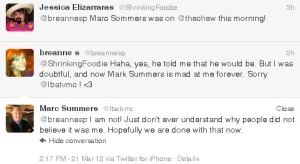 He seems like a pretty nice guy. But seriously, MS – I’m totally taking you up on that Double Dare Revival Tour.

2 thoughts on “The Day Marc Summers Was Mad at Me”